People gathered outside the tiny store at 20 Cumberland St to get their dose of cannabis. Ameri Cannabis has no online presence, which meant that they opened their doors without much fanfare. So who are Ameri Cannabis?

Ameri Cannabis is located at 20 Cumberland St. in Yorkville. Rob who’s a manager at the store says that Ameri is not trying to be the “brick warehouse of pot vendors”. He says that they’re trying to be a more boutique location with knowledgeable staff. They want people to enjoy their visit and get what they need (you can also view a great range of cannabis products on our site here, why not take a look at edibles?)

At Ameri Cannabis, customers will be able to browse various products in person, but they can also use tablets to learn more about and compare different cannabis strains. Orders are entered into the tablets before clients then move on to an “express counter” to complete the purchase, said Rob. 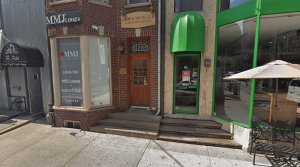 Staff at Ameri Cannabis say that “Hopefully the experience and the availability of the product will instantly make it worthwhile,” Rob added that he can guarantee the retailer won’t run out of cannabis anytime soon. Shortages plagued the rollout of the provincially-run Ontario Cannabis Store, which operates online and also supplies bulk cannabis orders to retailers.

When at the store, customers will be able to use tablets with specialized software to place their orders before they get moved to an express counter for checkout.

Toronto’s only other retail location, The Hunny Pot on Queen Street W., has been packed more or less since it opened on April 1. Customers routinely wait up to an hour to purchase cannabis.

The City of Toronto will likely have a total of five retailers open in the next weeks and months. It’s not yet known when the provincial government may allow more stores to apply to open their doors.

Ameria initially hoped to have a “soft launch” so that its staff could get acquainted with its product line more slowly, however the demand was overwhelming so the company had a full launch.

When Ameri’s application for a retail location was first posted online by the Alcohol and Gaming Commission of Ontario a lot of people were surprised that the store would be opening in Yorkville. These days Yorkville is known for it’s luxury condos and high-end fashion stores.

Being located in a wealthy neighborhood will make it more convenient for shoppers who may have been afraid in the past to be associated with the drug before it became legal across Canada in October.

Opening a store in a posh part of Toronto is supposed to make customers feel at ease when buying products and becoming educated as to what is out there and what they’re carrying.

This means that some of Toronto’s wealthiest residents have easy access to Cannabis products. Ameri opened on Sunday because the store wanted to address any bugs in its operations, prepare staff and avoid the crush of buyers that The Hunny Pot Cannabis Co. experienced when it became Toronto’s first cannabis retail outlet to open its doors April 1.

Only 11 of the 25 stores that will receive licenses to operate across the province are currently open. In addition to two in Toronto, there are three in Ottawa, two in Kingston and single locations in London, Burlington, St. Catharines and Brampton.

Ontario’s government has decided to limit the number of licenses that will operate alongside online sales.

Now you know all there is to know about Toronto’s second Cannabis store, why not check our BudderWeeds range of products? You’ll find everything from CBD products, to flowers to edibles!